From trivia questions on the backs of cereal boxes to delightfully obscure tidbits, who doesn’t love a good set of fascinating fun facts? Especially when the facts are about something as organically captivating as skydiving! If you consider yourself a regular trivia buff (or maybe you just want a little mental stimulation) we’ve got something great in store. Let’s get to it – here are our favorite interesting facts about skydiving to explore. 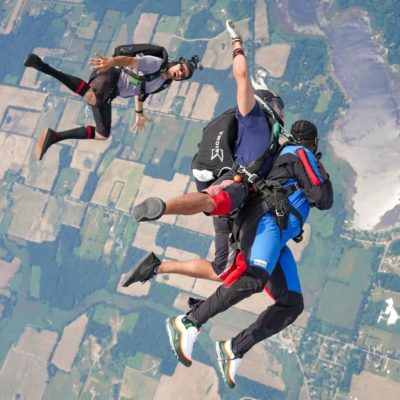 Back in 2017, at the tender age of 100, Alfred “Al” Blaschke made a tandem skydive and entered the elite centenarian skydiver club. And if that wasn’t impressive enough, three years later, he was back at it again. This time to celebrate his twin grandsons’ college graduation. Born January 4, 1917, Al just completed his most recent skydive at the incredible age of 103 years and 181 days. Al is currently the Guinness World Record world’s oldest tandem skydiver.

Although the Guinness World Record book does not currently list an entry for the world’s youngest skydiver, the consensus seems to place the age of the youngest jumper around four years old.

The current world record for the world’s highest skydive is held by Alan Eustace. On October 24, 2014, Alan made his ascent via a gas-filled balloon to an altitude of 135,908 feet – nearly 26 miles above the earth. Upon reaching the final height, Alan detached himself from his balloon convoy and experienced a freefall descent to earth that took four minutes and 27 seconds, which allowed him to experience max speeds reaching 822 mph!

*Interestingly, although Mr. Eustace “only” fell from a height of 102,000 feet, Joe Kittinger still holds the record for the longest freefall at around four minutes and 36 seconds for the leap he made on August 16, 1960. 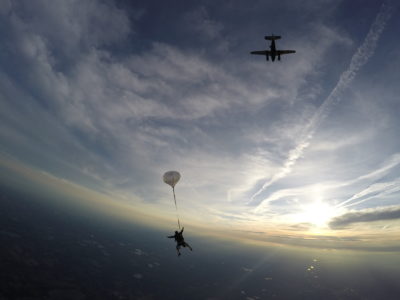 The 400 person skydive formation that was built in the skies of Udon Thani, Thailand was more than just an equally impressive and terrifying amount of bodies whizzing around at 120 mph, it was also the culmination of a multinational endeavor. Drawing on the resources of the entire Royal Thai Air Force and with the grit and determination of a group of skydivers bent on breaking a record, the record for the world’s largest skydiving formation was set in 2006. Even now, 15 years later, the record still has not been broken.

Sisterhood is a powerful thing. In 2009, women from around the world (31 countries to be exact) gathered in Perris, California to raise funds for the cancer foundation City of Hope and to set a world record while they were at it. Not only did they raise $900,000 for a great organization, but the women’s efforts were also rewarded when they walked away with the all-female world record – a record still held over a decade later.

Most Skydives In One Day

The achievement of most skydives in one day belongs to skydiving Hall of Fame member and Guinness World Record holder, Jay Stokes. Within a 24 hour span of time, Jay completed an astounding 640 skydives. To put it in perspective, that’s about 27 skydives per hour (most licensed skydivers call it a day after just six jumps)!

It’s true, Fido can freefall too! Dogs are man’s best friend. It only makes sense we’d want to include them in our every adventure. While most skydiving dogs are specially trained military canines, there are civilian high-flying pooches out there!