The benchmarks for human achievement are tied to records for furthest, fastest, longest, deepest, and in the case of skydiving – highest! Like all other records, the ceiling for the highest skydive has been challenged ever since Colonel Joseph Kittinger made the leap of all leaps in 1960 from an altitude of 102,800 feet! While Kittinger’s world record skydive has since been broken, this record is considered the most impressive considering the technology of the time and the knowledge base of whether a jump from such heights was even survivable. Without question, Kittinger’s bravery is celebrated as he was the first to venture into the great unknown. Remarkably Kittinger’s records for the highest parachute jump and fastest velocity stood for 52 years!

Colonel Kittinger’s jump was used for science to learn how the human body could be kept safe in space and how best to safely return to earth using a bailout system. In 2012, the record for the highest skydive in history was broken by Felix Baumgartner in what’s been considered as the greatest marketing stunt in history! People from around the globe stopped everything to watch a YouTube live stream of Baumgartner stepping out of his Red Bull capsule from the stunning altitude of 127,852 feet! Baumgartner’s jump would set records for the highest skydive in history, fastest freefall speed (843.6 mph or Mach 1.25), and become the first man to break the sound barrier without vehicular power. Additionally, Baumgartner broke the records for vertical freefall distance with a drogue parachute, and vertical speed without a drogue.

On October 24, 2014, Alan Eustace jumped from 135,889 feet! Eustace’s descent lasted 4 minutes and 27 seconds and reached a speed of 822mph setting new records for the highest skydive and total freefall distance of 123,414 feet!

Our version of skydiving keeps us a little closer to earth, but it’s worth mentioning in this article that Skydive Tecumseh does offer the highest altitude skydive in the state of Michigan! Most skydiving centers offer jumps between 9,000 and 13,000 feet (we offer these altitudes as well), but for those seeking the ultimate skydiving experience, we regularly skydive from 18,000 feet! Jumping from 18,000 feet does require the use of oxygen to avoid hypoxia, but it’s our most popular skydive as it truly offers the ultimate for those looking to get the most out of their skydiving experience from freefall time to sheer adventure. 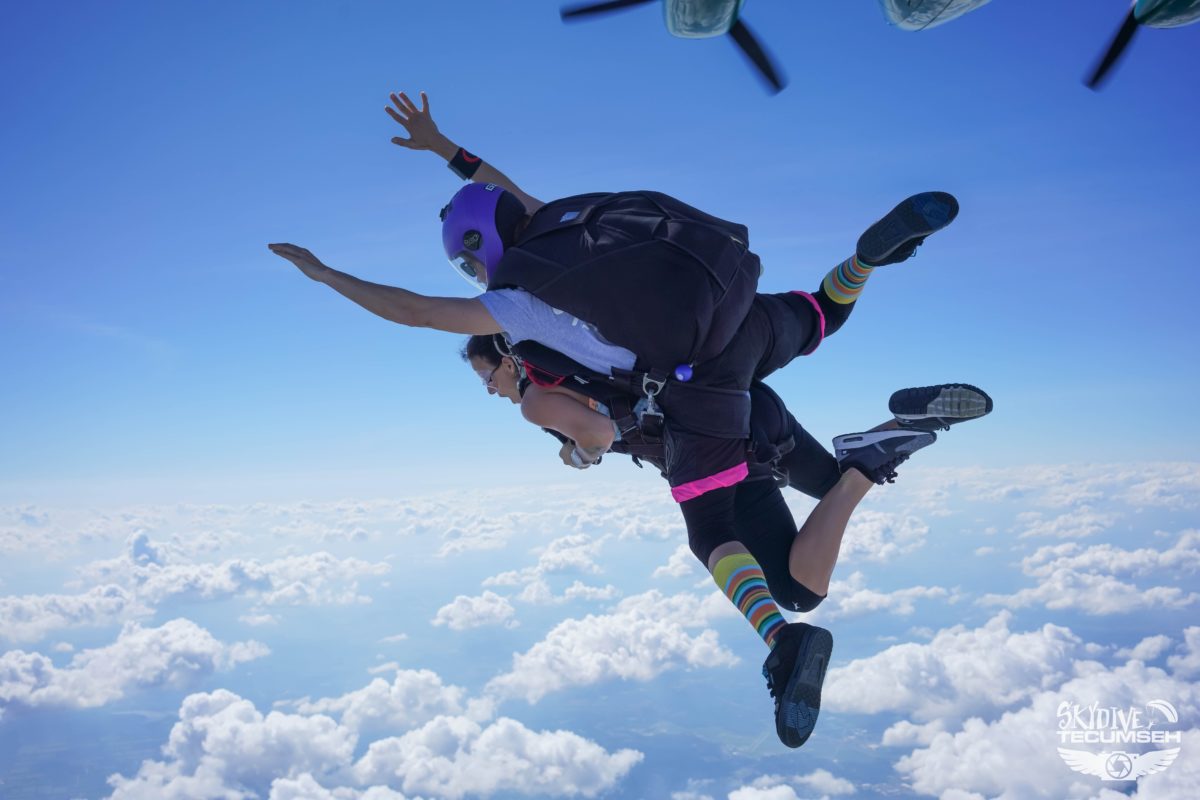 If you’d love to make a high-altitude skydive, we’d love to host you! Please contact us with any questions or click here to begin your skydiving adventure!

Great experience!! This was my third time doing a tandem jump but first time with Skydive Tecumseh. Being able to jump from 18,000 feet was awesome! Plane ride up is quick and comfortable. Instructors were friendly and professional. If you're thinking about...just do it!!