When it comes to skydiving, higher is better – right? The short answer is yes! Providing you open your parachute at the same altitude, jumping out of an airplane from higher up gives you more freefall time. The long answer is… also yes! However, there are some things to know about jumping altitudes that are both interesting and useful when you are squaring up to go skydiving for the first time. You have likely heard the term HALO skydive, which is an acronym for High Altitude Low Opening – so let’s have a quick look at both what this means in general, and how it might affect you…

While jumping out of a flying machine and using a parachute to land safely was not invented for military purposes, it was first applied en-masse during World War 2. Military parachuting was, and is, a way to put a bunch of soldiers (and gear, crates, vehicles, etc.) somewhere that you cannot land a plane. HALO jumps are done by sneaky special forces types as a method to get into locations where you would really rather not have anyone know about it, with the general idea being that even if you have fancy radar technology and know that a plane just flew over – there is no telling when, where or even if some people jumped out of it. The low opening part means performing a freefall to get down quickly by deploying your parachute relatively close to the ground. Another way this can be done is HAHO (High Altitude High Opening). Modern ‘square’ parachutes are very steerable, so it is possible (with lots of extra clothes and some navigation tech) to jump from very high, quickly deploy your parachute, and then fly a great distance away from your trackable aircraft – thus completely bamboozling your enemy. 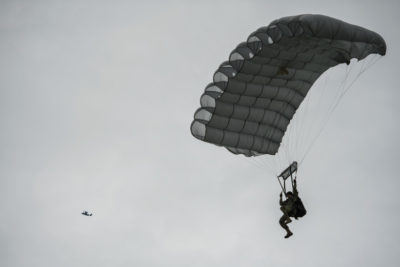 HALO is a pretty common term sometimes used by skydiving operations that are able to offer additional altitude. For civilian skydiving, people generally open their parachutes at around 3,000 or 4,000 feet, which allows for both a proper amount of freefall and a good length of time to fly around and land in the right spot.

As you go higher the air gets thinner, and the rules laid out by the United States Parachute Association (USPA) state that once you go over 15,000 feet you need to breathe oxygen in the plane. Going above 15,000 feet is really what defines a high-altitude jump, and a few dropzones are able to offer this (like us!) if you are lucky. The practicalities and additional expense of having an oxygen system in the aircraft mean that sport skydiving mostly happens from just under 15,000 feet – which gives you a minute of freefall. More freefall time is indeed better though, so the ability to offer high altitude jumps is very special and definitely worth investing in for your first, most special skydive. We offer jumps up to 18,000 feet – which adds another 20 seconds to your freefall! 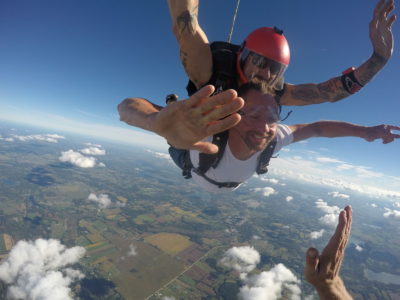 A HALO jump altitude is basically any skydive that happens over 15,000 feet – but the highest HALO jumps have been way higher. The highest skydives in history started back in 1959, a man called Joseph Kittinger jumped from a balloon at 102,800 feet – a record that stood for 53 years until it was broken in 2012 by an Austrian called Felix Baumgartner (127,851 feet) and again two years later by Google tech dude Alan Eustace (135,889 feet).

Skydiving is awesome no matter what (sensible) altitude you do it from. If you go from the standard height or upgrade to a HALO style jump you will remember it forever. We are super proud to be one of the select few locations able to offer the choice of high altitude skydiving, and we look forward to sharing the sky with you very soon.

Skydiving for the first time at Skydive Tecumseh was by far one of the greatest experiences of my life. No matter how high maintenance I was before the jump when I was scared, every single jumper employee did everything they could to make my experience unforgettable. I have already recommended here for many of my friends wanting to go with me for their first time on my next round!