The United States Parachute Association (USPA) is the governing body for the sport of skydiving in the US.

The USPA gathers data every year on the number of skydives made and the number of injuries sustained during those jumps. According to the latest data, USPA members reported 729 injuries in 2014.

With a total of around 3.2 million skydives made that year, that’s roughly 2.3 injuries per 10,000 skydives. A tiny proportion of the total number of jumps.

What Are The Most Common Skydiving Injuries?

While skydiving injuries are rare, when they do happen, they tend to happen on landing. That’s because our bodies are slowing from a forward speed of around 20-30 mph under your parachute to a complete standstill. 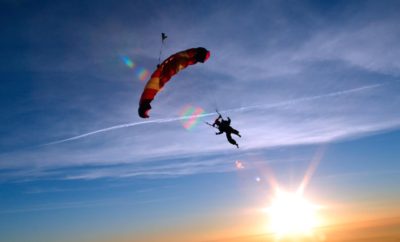 If we don’t operate the parachute correctly, (i.e., we forget to slow down or slow down too late), it can result in ankle or leg injuries as we come into contact with the ground.

Similarly, tandem skydivers are briefed to lift their legs up for landing. This allows the instructor to take the impact, which they minimize through the correct operation of the parachute, while the tandem student’s legs are out of the way. More often than not, tandem skydivers land on their backsides to further negate the risk.

Skydiving Injuries And The Media

We know that the media can be quite negative in its portrayal of skydiving.

The reason for that is simple; with 3.2 million skydives made in a year and the majority of them injury-free, to report on every one of those would be impossible. Plus, a story of yet another incident-free skydive isn’t going to make the front page!

When a skydiving injury does happen, the media can be quick to grab on to it. A story about a skydive gone wrong has much more of a sensationalist spin than one that goes well.

The reality is that more often than not (as the statistics prove), skydives go ahead without injury or incident. 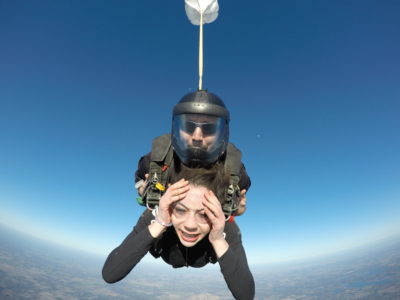 Skydiving fatalities do, sadly, happen. It’s the nature of any extreme sport that occasionally, things do go wrong.

However, the majority of those incidents happen when highly experienced skydivers perform advanced maneuvers or through human error. While we do everything we can to negate this risk, incidents can happen.

“Tandem skydiving has an even better safety record, with 0.003 student fatalities per 1,000 tandem jumps over the past decade. According to the National Safety Council, a person is much more likely to be killed getting struck by lightning or stung by a bee.”

If you are thinking about skydiving with us and have any concerns at all, get in touch and we’ll be more than happy to answer any questions you have.

Went and did my first jump with Skydive Tecumseh and t was awesome! My dad had been telling me for 10 years he was going to take me and never did. So finally for his 50th birthday, I took him! It was an amazing experience all thanks to the staff at Skydive Tecumseh! They were friendly, helpful, and totally laid back! They definitely knew how to make a first-time jumper feel at ease! I would highly recommend them and will definitely be going back again!