Were you one of those students who assumed physics would have no place in your life outside of the classroom? You might have spent the seasons of your scholastic youth stifling yawns during every lecture – but we think we’ve found a way to make physics undoubtedly interesting, dare we say, even thrilling! We’re talking about the physics of skydiving!

The Science of Skydiving

What do you say? Care to learn a little more about the science of skydiving? The study of physics concentrates on matter and its motion through space and time. For our little lesson on the physics of skydiving, we will focus on how the body experiences freefall and a little behind-the-scenes look at parachute physics.

Technically speaking, the definition of freefall in physics is when an object is falling under the sole influence of gravity. As it relates to the science of skydiving, though, when we reference freefall we are talking about the typical portion of time sandwiched between when you exit the aircraft and deploy the parachute. As you will see, there is more than just gravity at work during a skydiving freefall! 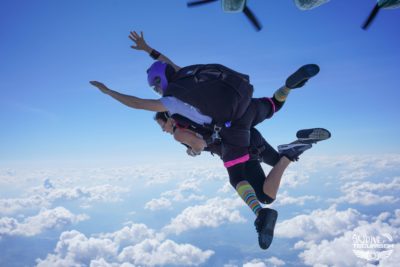 After exiting the aircraft, your body will rapidly pick up speed as you fall toward the earth and, within about ten seconds, you will reach your top freefall speed. This is also known as terminal velocity. Terminal velocity is the point at which there is no further acceleration and is the speed reached where the force of gravity is equivalent to the amount of air resistance encountered during freefall.

You see, open-air isn’t really empty. It is filled with countless air molecules. As you freefall during your skydive, your body collides with these particles and encounters resistance. This air resistance then creates an oppositional force to counter the gravitational pull of the earth. The counter force of air resistance is why freefall doesn’t really feel like falling at all. That’s right – skydiving freefall feels more like floating than falling!

Generally, the terminal velocity that is reached by a belly-to-earth skydiver is 120 mph. However, by changing body position and adjusting the amount of surface area exposed to the air, you can significantly decrease the amount of air resistance and increase terminal speed.

The thrill of freefall is only half of the skydiving physics equation. There’s also the physics behind parachutes to consider! 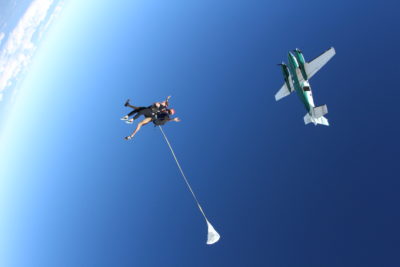 The physics behind the parachutes used for sport skydiving mimic the physics of flight for a small fixed-wing aircraft. As a matter of fact, within the industry, jumpers often refer to their parachutes as “wings”. Generally speaking, the square/elliptical sport parachutes that are used today are modeled after an airfoil that, when inflated, produces an aerodynamic force. The wing shape of the parachute causes the air to move more quickly across the top of the parachute than it moves across the bottom.

While you will eventually be drawn by the force of gravity to the ground, instead of merely drifting down you can actually fly and maneuver around with a modern sport parachute.

Take Your Know-How to New Heights

You don’t have to be the next Sir Isaac Newton to understand the physics of skydiving. Take this lesson to new heights and schedule your skydive today!

It was my first time skydiving and I was so impressed by the staff at Skydive Tecumseh! Everyone was friendly and professional making you feel comfortable from the minute you arrive. The experience was unexplainably awesome! The free fall was such a rush, the parachute release was much less of a jolt than I anticipated, the landing was super smooth and Ken Beach is the bomb! I will be back for my second jump soon.