Have you ever wondered how loud you have to yell in freefall for others to hear you? Well, stop wondering. You actually can’t be heard in freefall. Like, at all. Once the canopy opens it’s a different story, but talking in freefall just doesn’t happen. There are stories upon stories of skydiving experiences out there, and we’re excited for you to add your unique experience to the mix. Let us debunk some of the most common skydiving myths so you can be prepared for what to expect when you make the jump of a lifetime.

You go up when the parachute opens

Negative. Your rate of descent actually just slows down and gives the illusion that you’re going up. You go from rushing towards the earth at around 120mph to an average descent rate of about 15mph. Now, that seems like a big difference! Yes, but the way the canopy is snatched and opens to fill with air is designed to be seamless.

The reason that skydivers seem to go up in videos once their canopy is opened is because of the way the photos or videos are shot. Typically, the tandem pair deploying the canopy is recorded by a camera person who is still in freefall, and this is when we can actually visualize the average 100mph difference in the jumpers.

Everyone who steps foot on the dropzone has safety at the forefront of their mind. Statistically, you’re more likely to get hurt driving to the dropzone than you are on the actual skydive. Nonetheless, being apprehensive about skydiving is not invalid. However, fatal skydiving accidents are rare and, by and large, preventable.

Skydiving gear is constantly improving. The advancements made in the last decade are unmatched, and manufacturers are always listening to input from skydivers to make their gear more comfortable and efficient. Manufacturers produce safety labels on gear that show regulations and recommendations for optimal use of the gear. Skydivers follow these instructions to ensure the safest and most enjoyable experience possible.

Who makes sure skydivers stay safe?

On top of looking out for one another, skydivers are kept in check by dropzone owners, managers, safety and training advisors, pilots, packers, ground crew, manifest workers, and a plethora of others who allow our beloved sport to continuously thrive. Acting above those listed is the United States Parachute Association (USPA) and the Federal Aviation Administration (FAA). The USPA produces non-negotiable regulations (called basic safety requirements or “BSR’s”) as well as safety suggestions for skydivers. The FAA is the government agency that makes sure our pilots are operating safely.

Skydiving, like any extreme sport, has just enough risk to make it fun, but extremely dangerous? Nah.

It feels like a roller coaster when you jump 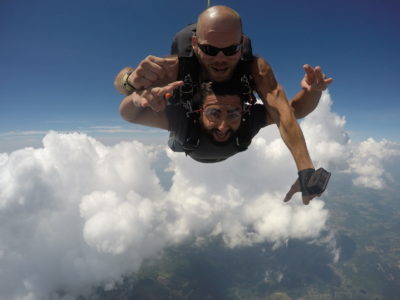 Some people love the stomach drop that happens while riding a roller coaster or driving over rolling hills. Other people absolutely despise it. Regardless of what type of person you are, you don’t have to wonder about experiencing this during your jump.

It’s common to think you’ll experience this feeling when you jump from a plane, because, well … you’re jumping from a plane! However, we have to account for how fast the plane is moving forward PLUS the downward speed we’ll gain as we fall.

When you jump out of a plane, you go down something we call the hill. All this means is that you surf on the wind from the plane for a bit before you start accelerating downward. Essentially, you’re not going 0 to 100, you’re going approximately 100 to 120 (miles per hour, that is).

Everyone falls at the same speed

Think about this, if you dropped a feather and brick at the same time, which one would hit the ground first? The brick, hands down. This would be different on the moon, because of gravity (or lack thereof). In order to fall at the same rate as other jumpers, we have jumpsuits and weight belts! Typically, lighter people struggle to increase their fall rate, so they’ll wear tight-fitting jumpsuits. There are baggier jumpsuits designed to slow jumpers down, allowing people of varying sizes to jump together!  So, will you feel like you were falling slower or faster than your pal? No.

Skydivers can freefall in different orientations (belly-to-earth, sitting, head down, etc.) and these all affect their terminal velocity. For example, the friction of the air is greater when a jumper is falling belly-to-earth, because they are presenting more surface area. If they flip over to be standing or on their head, they have less surface area, less friction, and will therefore speed up.

Skydivers enjoy doing a deliberate and premeditated activity with a community that supports them, and that definitely doesn’t make them crazy. Skydivers are learners, teachers, and conquerors of fear, not thrill-seekers and risk-takers. Something that makes skydiving such a unique sport is inclusivity. Regardless of the differences that we all battle on the ground; they simply don’t exist in the sky. Skydiving truly gives you a different perspective, and while the jump itself lasts about 10 minutes, it has the power to benefit you for the rest of your life. You will find that skydivers are some of the kindest and most safety-oriented people that this world has to offer.

So, don’t worry about the myths, like “can you breathe while skydiving?” YES … there’s plenty of air and it is self-serve! Don’t hesitate to reach out to us with any questions or concerns. We can’t wait to see you in the air!

Skydiving for the first time at Skydive Tecumseh was by far one of the greatest experiences of my life. No matter how high maintenance I was before the jump when I was scared, every single jumper employee did everything they could to make my experience unforgettable. I have already recommended here for many of my friends wanting to go with me for their first time on my next round!