Skydiving is one of the most amazing things that humans have access to, and as soon as you have tried it you will want to tell all of the people you care about most that they should do it too. Shortly after people figured out how to jump out of airplanes for fun, they began looking for ways to get other people involved as quickly and efficiently as possible. This idea quickly grew from aiming at people who wanted to be skydivers themselves, to devising a means by which people could possibly experience a jump without doing an involved training program first.

After some careful experiments in the early eighties involving big old military canopies, some smart people worked out that it was possible to skydive while harnessed together and then land under a single parachute. Tandem skydiving was born.

How Does Tandem Skydiving Work?

A tandem skydive refers to when a student and an instructor do the whole skydive harnessed together piggyback style – with the student on the front (or bottom) and the instructor on the back (top). The instructor is a highly experienced professional and handles the technical aspects from start to finish – such as deploying the parachute and then navigating back to the dropzone. The student is generally someone brand new to the sport, who wants to try skydiving and can do so with just a straightforward briefing beforehand, that covers the crucial information and procedures.

Being a Skydiving Student

Tandem skydiving has been refined into a very slick and smooth process that gets people skydiving in just a short period of time. It is designed to let people savor the sensation of freefall without having to worry about any of the technical stuff – but there are still some things to get right for a perfect descent.

When you jump from an airplane you don’t just fall straight down. The plane is traveling forwards at around 100mph, so you go forwards as soon as you get out and then start to fall. Sure, you can just kind of tumble through this part, but a much better version is when you exit nice and stable – maintaining your heading and awareness the whole time. Your instructor will show you exactly how to help achieve this – which will include keeping your head up and your arms across your chest. 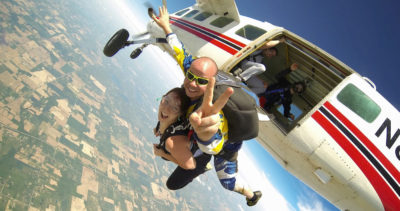 Arching your body (head up, hips down) creates stability, which is also helped by keeping your arms wide and your legs out. Your instructor has done this many, many times and is able to handle whatever movements you make – but they would much prefer it if you held a nice position rather than swimming, flapping, or flopping about. It is possible to skydive in many different positions, but belly down is the one used at the start for both tandem skydives and solo jumpers alike.

Parachutes are designed to open in stages and are surprisingly gentle. Sure, you get quickly swooshed up by your shoulders (where the attachments are) from horizontal to vertical – but the process is gradual. If you have ever seen video footage of skydivers deploying next to each other where the one deploying goes zooming off the top of the screen, do not worry – this is just an optical illusion created by the camera still falling at 120mph.

Your instructor is responsible for getting the skydive landing right, but as the student, you need to help by picking your legs up straight out in front. It is hard to run while harnessed together – so sliding in on your bum is the best way. This will be in the pre-jump briefing, but you will be thoroughly reminded by your instructor exactly when to pick your legs up just before you land. Again, parachutes are very good at what they are supposed to do, and landing is as soft as hopping down from a single step. Sure, if you get the timing wrong it is possible to end up in a big heap – but this is rare. If you are nervous about landing – watch some of the people jumping before you and you will see it is super easy to do. 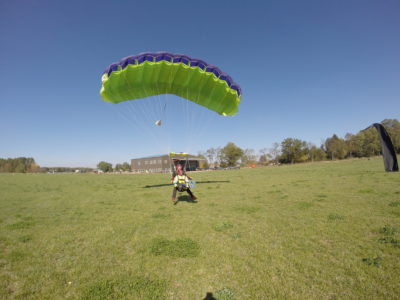 Across four decades, tandem skydiving has become a tried and tested (many, many thousands of tandem parachute jumps are completed every year) way to start skydiving. You need to be at least 18+ to skydive at our USPA Group Member Dropzone, but there is no upper age limit, and while there is a weight limit – it is a fairly generous 230lbs. Tandem skydiving is not only an amazing experience that everyone should do at least once, it is a window and a door into the amazing sport of skydiving.