We have a fun little announcement to make: We have night skydiving coming up! Oooooo, right?!

Night skydiving, for most experienced jumpers (more on that later), counts as pretty much the ultimate adrenaline rush. Why? Well: even though performing a night skydive is required to earn one’s higher-level licenses, there’s no getting around the fact that the risk quotient of a nighttime skydive is higher than that of its “normal,” well-lit counterpart. Let’s dig into that, shall we?

A “night skydive,” according to the USPA (United States Parachute Association), is a skydive that occurs between one hour after official sunset up to one hour before official sunrise. That means that the skies might not be pitch black when the jump is made — especially because night skydives are almost always scheduled to coincide with the full moon — but the USPA and the FAA got together to determine that criteria, and it stuck: basically, jumps falling within those hours are sufficiently different from “day jumping” that special considerations have to be made and special equipment has to be used. 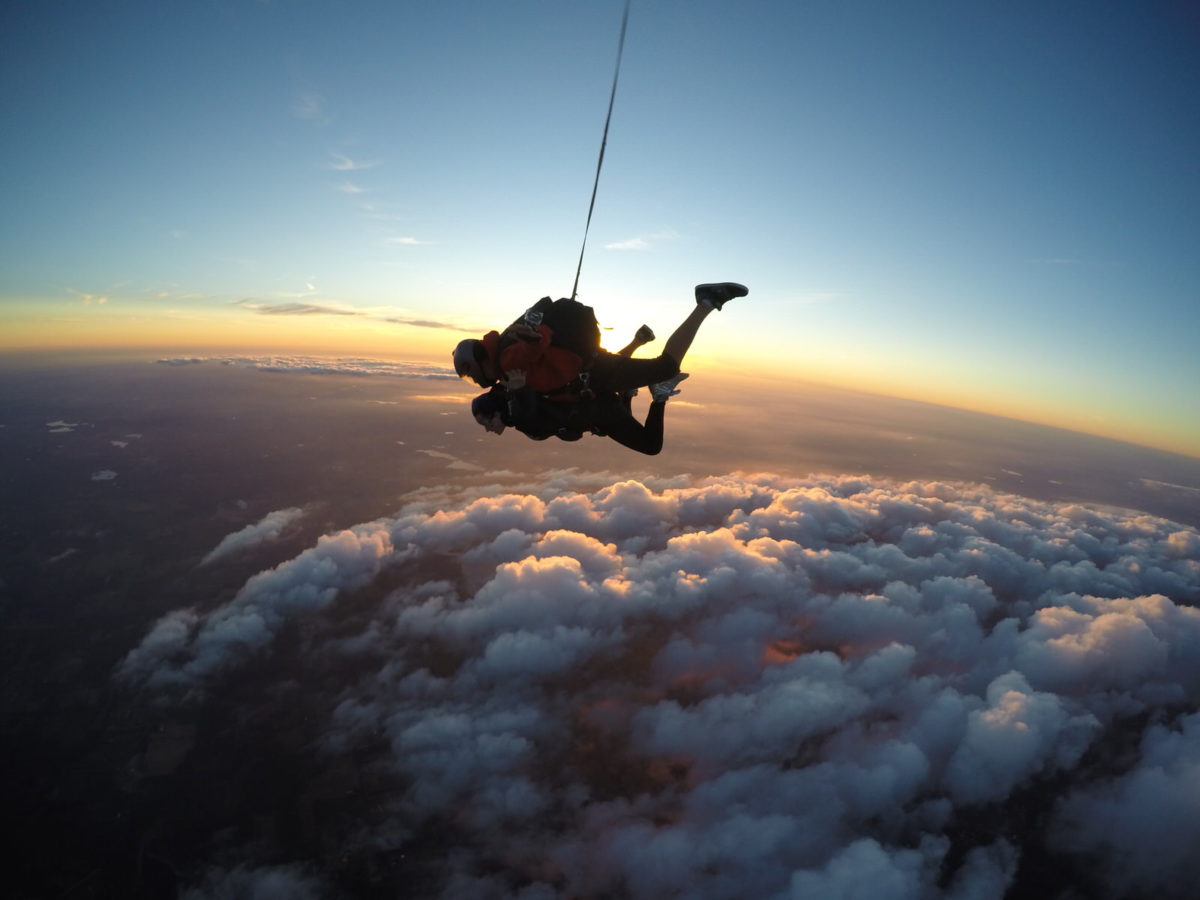 …Is not a thing. Because of safety.

Even in the case of a very experienced skydiver, performing a night jump is a challenge. The risks of skydiving go up when vision goes down. There’s additional equipment required that’s not ideal for a tandem. The risks and symptoms of hypoxia are both elevated. Finally, the environment of a night jumps is totally different from that of a daytime skydive. For a business that is actively working to mitigate risk, offering tandem skydives at night is not a tenable move.

Night skydiving requires its participants to be experienced jumpers. Namely, they need to sport a USPA “B” (or higher) license. (Flashing a B-license means that the skydiver in question has completed at least 50 successful solo skydives and demonstrated mastery in landing accuracy and freefall maneuvers, completed a water landing practicum, and passed a written exam. Whew.) By the time that skydiver gets on the plane, they’ve been very thoroughly briefed — and kitted out with a light-up altimeter, a flashlight and a whistle, generally with glow sticks or LEDs fastened securely to every major surface. It’s a big deal.

Finding the Landing Area At Night 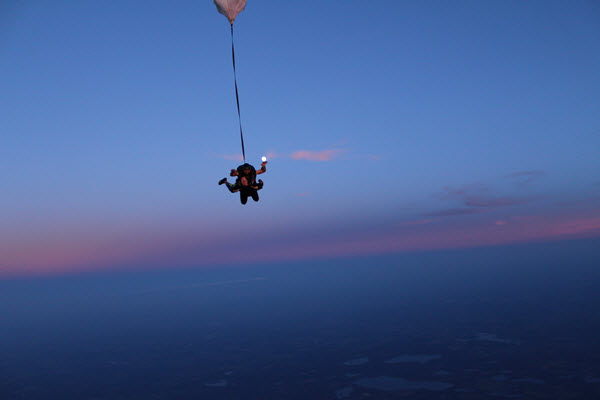 Night skydiving looks very different from daytime skydiving from altitude. To help make sure that a dropzone’s skydivers aren’t spread all over the state by the time jump run is done, dropzones make special arrangements to help skydivers find the landing area. Often, that little “over here, guys!”  is made of a line of cars, each with its headlights on, all pointing to illuminate the landing area with a cheerful glow. Spoiler: it’s still a challenge to find that landing area when you’re hanging your head out the aircraft door in the middle of the night.

Let’s make no bones about it — night skydiving is a peaky lil’ challenge for every experienced skydiver who takes it on. And why shouldn’t it be? Trying something new and outside your comfort zone is bound to have that effect. Speaking of which: Why not get started on your path to night skydiving with your very first tandem jump? We’d love to be part of that journey.

I've been wanting to skydive for a number of years and on September 3rd for my 50th birthday, I jumped with Skydive Tecumseh. The staff were amazing and the experience was unbelievable and I will be back!