The results are in! The accelerated freefall method — known as “AFF” — is the most popular way to learn to skydive in the United States. We’re proud of how many of our AFF students at Skydive Tecumseh go on to become awesome hobbyist skydivers, to compete in national and international skydiving events, and even to become skydiving instructors themselves. Need more reasons to learn how to skydive? Step right up, y’all! 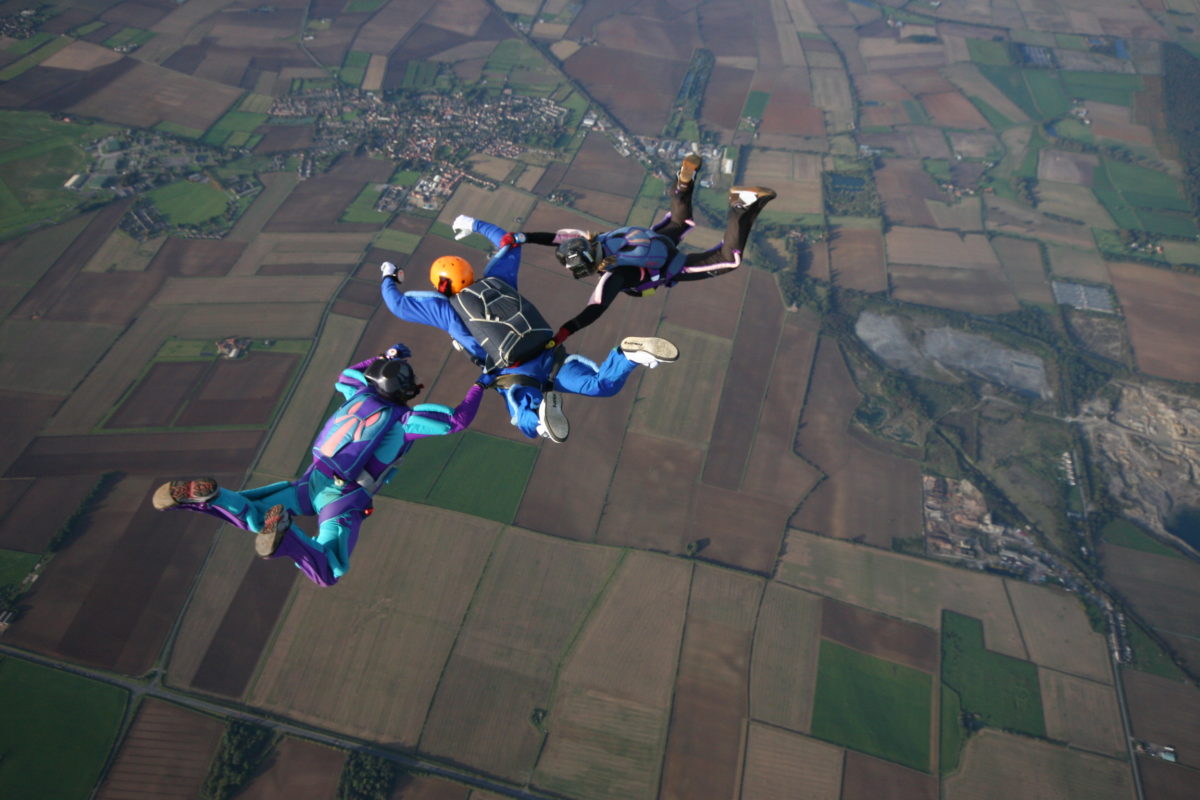 You might already imagine the sense of no-holds-barred accomplishment that you’ll feel when you make your first solo skydive. That’s a benefit in and of itself, no? Like, here’s the straight dope: Whether you’re scared of heights or not, the idea of throwing yourself from a perfectly good aircraft is daunting, and getting to the point where you can do just that with skill and style is a helluva thing. Nothing on the planet quite matches the feeling of that landing.

2. Pull off the very coolest stunt ever!

If you’ve been having flying dreams since early childhood, you’re in for a treat – those dreams are about to come true. Completing a skydiving certification program at Skydive Tecumseh will unlock that superpower — no joke — and show you just how achievable human flight really is. It might surprise you to know that we actually have a huge amount of control over our bodies when we jump. Just by shifting an arm — a leg — even the direction you’re looking — you’ll be able to move around the sky. What a smile that’s gonna put on your face, buddy. What a smile.

3. Enjoy benefits that go far beyond the dropzone.

Work, relationships, money, school…a phone that won’t stop pinging notifications…girl problems, boy problems, kid problems, self problems…this is the world we live in, y’all. What if we told you that there’s a temporary escape for them that won’t, y’know, eventually land you in rehab? Ask any skydiver if they’ve ever thought about their worries while zooming through the sky. We’re going to go ahead and guarantee you that the answer is no. Trust us on this one: no grumpy boss, unresponded-to-SMS ot to-do list can withstand the pressures of freefall. It’s liberating. It’s relaxing. And it’s frickin’ FUN.

The worldwide skydiving community, united in mad love of our incredible sport, brings together a huge number and variety of amazing humans under one banner — and there’s room for you among the happy throng. By going through your AFF, you’ll be walking into the open arms of hundreds of thousands of extraordinary adventurists who want to share the sky with you. It’s not just about freefall, either: We generally stick around the drop zone after the last plane has landed to share beers and tell stories of the day.

If we leave you with one thing, it’s this: Life after AFF is really, really good. Skydiving is a sport that encourages endless progression and learning; self-improvement; fun; positivity — the combined result of which which makes AFF skydiving cost less than, y’know therapy, and we’re damned sure it works better. (That’s a subjective statement, of course, but we’ll stand by it.)

Once you’ve completed your AFF training, you’ll see just how far you can go in learning to fly your body, jump with your friends, even compete on the national (or even global!) level. Reserve your spot in the program today, and let’s make this a reality together. Let’s do some AFF, Michigan!

Great experience!! This was my third time doing a tandem jump but first time with Skydive Tecumseh. Being able to jump from 18,000 feet was awesome! Plane ride up is quick and comfortable. Instructors were friendly and professional. If you're thinking about...just do it!!