If you’re trying something you’ve never tried before–skydiving, for instance–it’s hard to know what is or is not a big deal. For instance: jumping in heeled shoes? Big deal bad idea. Jumping in a dress? Actually, totally do-able (if you’re willing to get a grass stain on it and you’re not too bothered about perfect modesty). Jumping when it’s a cold fall day on the ground? Big deal, unless you’re a big fan of icy eyelashes–it’s about thirty degrees colder up at altitude. Jumping at sunrise or sunset? Big deal–the beauty will knock you sideways.

Jumping when you’re not feeling so hot? You might not think it’d make much of a difference one way or the other, but it is a big deal. And here’s why.

1. Your eardrums can pop!

EEK! Right? Most folks, thank goodness, haven’t ever experienced the utter misery of a popped eardrum. That’s for good 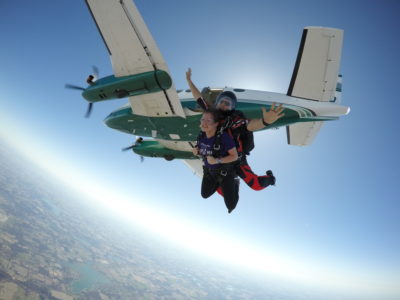 reason: because the pressure differential between the inside and outside of the ear needs to be high enough to do the dirty job.

It’s important to insist here that this does not happen to a healthy ear. Never. Never-ever. It only happens to seriously congested people, and it doesn’t happen on every occasion. If you’re at risk for it, though, stay down. Seriously. Reschedule.

2. Ever had an agonizing headache? Triple it.

Much more likely than a burst eardrum is the cranial misery that results from illness-plus-altitude. In much the same way that the eardrum problem works, this has to do with the pressure differences betwixt the world outside your head and the world inside your head.

A healthy body can–and does–manage pressure differences just fine. If you add a head cold to the equation, it can’t. The body tries its best to sort it out, trying to pump blood and move swollen tissues around, but it can’t make it happen until the tissues calm down and the inflammation has passed. An altitude headache is the kind of thing that Advil doesn’t help. You just have to wait it out. The wait, suffice it to say, is not fun.

3. It’s really not nice to your new best friend.

Your hardworking tandem instructor–the guy or gal who has been hand-picked to safely take you from the door of the plane back to terra firma–would like to very kindly, respectfully beg you not to jump with a head cold. Here’s why.

As you freefall, the thin air at altitude will start to thicken back to the ground-level norm. As it does, your angry, stuffy nose is going to scramble to haul itself back to equilibrium. The way it does that is by running. It basically empties itself right out, all over you and your instructor, and there won’t be a Kleenex box floating there to help you out. Trust us: it’s a messy scene.

So–now you know. Skydiving when you’re not feeling well is a big, bad deal. Don’t do it! Happily, Skydive Tecumseh will be right here when you’re feeling better!

I've been wanting to skydive for a number of years and on September 3rd for my 50th birthday, I jumped with Skydive Tecumseh. The staff were amazing and the experience was unbelievable and I will be back!