Curious about swooping in skydiving? Technically speaking, skydiving swooping is an advanced form of canopy piloting where an individual induces speed through specific maneuvers and dives the canopy toward the earth—all while leaving enough time for the canopy to level out and glide horizontally across the ground.
If that swooped right over your head (see what we did there?), no worries! Allow us to take you on a broader tour of what skydiving swooping is all about and how it works. 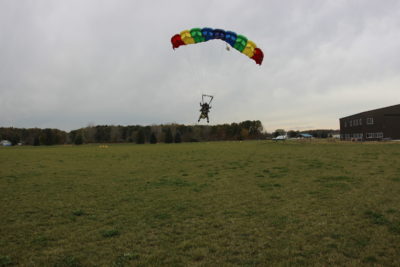 When you conjure up the image of someone skydiving, it’s likely you imagine someone in freefall zipping through the air toward the ground below. While this is one very valid form of skydiving, it is not the only way to skydive. Some forms of skydiving, like Canopy Relative Work or Swooping, contain little to no freefall at all!

Typically, individuals who focus on canopy piloting deploy their parachutes seconds after exiting the aircraft. While most skydives occur at altitudes from 10,000 to 14,000 feet (including Canopy Relative Work), individuals who are swooping will exit the aircraft from a lower altitude—generally around 5,500 to 6,000 feet above the ground. 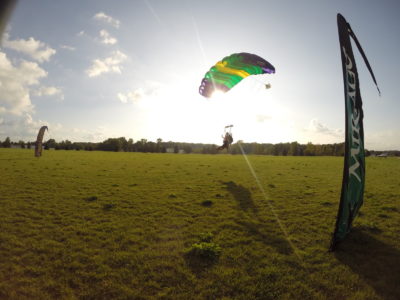 Skydiving Swooping Is A Competitive Sport

Many outside of the industry do not know that skydiving swooping is also a competitive skydiving discipline.

In a canopy flying piloting competition, competitors participate in a series of tasks to test their ability to control the parachute. Generally, the canopy pilot will navigate through a number of gates, formed by inflated floating buoys situated on water. The tasks during the skydiving swooping competition are centered around different goals: completing the course in the shortest amount of time/ reaching the greatest speed, flying across the water and swoop landing on a specific target on the other end thus displaying accuracy, gliding the farthest distance before touching the ground, or completing creative complex maneuvers all while navigating the course across the water.

Because swooping occurs close to the ground and you can see what is occurring in real-time, skydiving swooping is considered to be one of the most spectator-friendly skydiving events.

All types of skydiving carry certain inherent risks with varying margins for error. Because swooping adds additional risks—after all the premise is to dive a high-performance parachute toward the earth to generate exceptional speeds—the margin for error is dramatically reduced.

Skydiving swooping is considered quite advanced and should be approached with appropriate caution and proper training. For licensed skydivers, this training comes in the form of coaching and professional courses focused on parachute flight. It is not advisable to pursue swooping without taking the time to build necessary prerequisite skills.

Interested in canopy flying piloting? The first step is to learn to skydive! Book your skydiving first jump course today!

On Labor Day my daughter took our first jump. She got me it for my 62nd birthday to check off my bucket list. It was the most intense adrenaline rush I have ever experienced. James and Amber (my daughters tandem partner) were very professional and made our jumps fantastic. We will be back again and hope to bring a group with us. Tremendous experience.