When you’re shopping for a skydive, you might not think aircraft matters. You’re just planning to get out of it, after all. Who cares how you get there?

Once you’ve had a little education on the subject, you’re gonna think about it very differently. As a matter of fact, the aircraft a dropzone uses has a pivotal effect on your overall experience. Choosing the best one is like choosing to go to your wedding in a limousine or your aunt’s old Datsun. Sure, it’s just the conveyance–but it really sets the stage, n’est-ce pas? Here’s how the same phenomenon affects the three key factors in any given skydive.

Have you ever wondered why different dropzones advertise different altitudes in their marketing materials? Some dropzones advertise heights as soaring as 18,000 feet, while scores of others only bring jumpers up to 10,000. Almost without exception, that number is directly attributable to the plane.

Most smaller dropzones use the most common skydiving aircraft in the world: the venerable Cessna 182. The C-182 is a little workhorse. However: As a single-engine plane, it’s a little underpowered, so it can really only go up to 10,000 feet before it starts taking an unsustainable amount of time and fuel to go any higher. Turbine aircraft, on the other hand, go up to 13,500 for breakfast, happily hopping up to 18k when it’s called for.

2. Time Aboard the Skydiving Aircraft

Even though plenty of dropzones take jumpers up to the same 13,500-foot industry-standard altitude–but it can take vastly different amounts of time to get there. Depending on the kind of plane, that altitude gain can take anything from seven to twenty-something minutes. The less time you spend getting to exit altitude, the less time you’ll spend being nervous.

Remember that little Cessna we were just talking about? It takes about half an hour to make it up to 10k. You’d be, like, old by then. 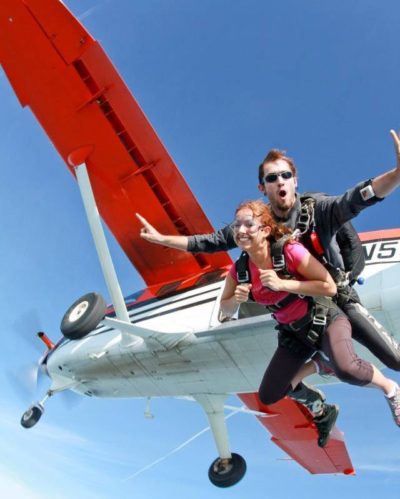 3. How comfortable the ride

We don’t want to go all mean-girls on single-engine aircraft. Pretty much every experienced skydiver on the planet has spent time in one. However: Once we discovered the existence of bigger, faster planes, we really haven’t looked back–and the third of the three big reasons for that is comfort.

A single-engine plane fits just three jumpers and the pilot. Everybody in there is packed in Tetris-style. When it’s time to go, you extricate your limbs from under and around everybody else’s, then scoot over to the door like your family’s incontinent old terrier used to do across the living room carpet. If you still have feeling in all your extremities when you first tip out into the air, you’re probably made of magic and didn’t need the plane to get up there anyway.

At Skydive Tecumseh, we’re not, like, snobs. We like to think of ourselves as connoisseurs. We appreciate the finest skydiving aircraft, so it’s a point of pride that that’s what we fly. Our jump planes take our students up to altitude in the very best, fastest, safest, most comfortable aircraft available. They are the most perfect of the “perfectly good airplanes” we’ve ever had the pleasure of snuggling into, and we’re looking so forward to introducing you.

Feeling adventurous? Go ahead! Reserve yourself a ride in one of the best skydiving aircraft in the sky. The only thing you’ll enjoy more is getting out of it!

It was great. Went from 18,000ft. It was on July 2, 2016. It was my 2ndtandemm flight. I will definitely come back. Recommend Skydive Tecumseh to everyone it was a great way to start your day. I'm 63 and coming back every year. Very professional and friendly staff. I absolutely LOVED it.