Gosh, do we ever know that feeling!

For first-time and beginning skydivers who have just fallen in love with the sport via a tandem jump, waiting for that first solo moment is just excruciating. Sure, your tandem instructor did a great job introducing you safely and thoroughly to the art and science of skydiving, but you long for independence.

You long to put own your own parachute and walk yourself to the plane and sport your own gear and stand in the door on your very own. You know that’s where you’re headed–you just, in the words of the foot-stomping Veruca Salt from ‘Charlie and the Chocolate Factory,’ “want it NOW.”

We get it. So here’s our informational love letter to our students who are jumping out of their own skins to jump, by themselves, out of our airplane. Skydiving independence is a three-part process: Jump number one, self-supervision, and the successful earning of an A-license. 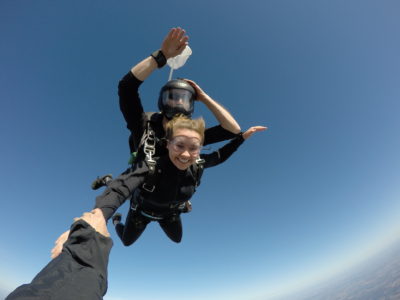 Contrary to popular belief, your very first skydive doesn’t have to be a tandem skydive. In fact, you can technically make a jump with your own rig the very first time you leave the plane–on jump number 1 on theAFF (Accelerated Freefall) Program. This jump necessarily includes buddies–specifically, two licensed, qualified instructors flying alongside you in freefall. Completing that AFF jump is much more involved than making a comparatively simple tandem leap: it’s a lot more stressful, and it involves six hours of training. If that’s what you’re into, though, we’re more than happy to lead you through it.

True independence, of course, is that first jump that you make as a real-life solo skydiver. Once you complete the AFF program and you’re signed off for self-supervision, you won’t have instructors or coaches along for the ride unless you specifically ask for them.

It may surprise you to learn that this can get boring, and quickly! The fun of skydiving comes from being able to jump with others and to dive in to your learning by attaining an A-license.

3. Getting that A-license stamp in your logbook 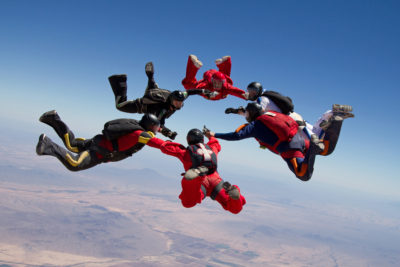 Upon completing an Accelerated Freefall (AFF) program, you’ll be a real-life serious actual-factual skydiver. Once you earn that stamp in your logbook, you’ll have at least 25 skydives under your belt–each demonstrating a particular skill or skill set upon which you’ve been trained–and you’ll have completed all requirements to get your United States Parachute Association A-license.

Your A-license is the ID which allows you to make solo skydives at any dropzone, all over the world, without instructor supervision. It’s the first of four in a sequence of licenses from A to D, signifying skill advancement.

It’s a challenge! There’s no doubt about that. However: We’ve discovered, over the years, that students who go full speed ahead into their AFF program are the students who do best. If you’re reading this, we bet you’re one of those gung-ho students, and we couldn’t be more excited for you. We’re going to be as stoked as you are to get you up there as an independent member of our extended “sky family.” Let us be the ones to give you that A-license stamp!

Fast efficient staff, GREAT friendly tandem jumpers! This is the best place stateside to jump! You can bring all levels of family and friends and all will have a lifetime experience. A1 setup here. My favorite in Michigan by far.